Erin and I met up with Laurel, Michelle, Kara, and Natasha at The Tower Bar last night to see Lady Dottie and The Diamonds play some mean blues.

The Tower Bar is the first floor of an old Art Deco tower in the City Heights neighborhood of San Diego. The walls and ceiling are covered in vintage beer memorabilia. The televisions behind the bar were playing She-Devils on Wheels. It’s a strange little place in a fairly sketchy part of town, but evidently it’s the place to be on Monday nights — Lady Dottie and The Diamonds play weekly. 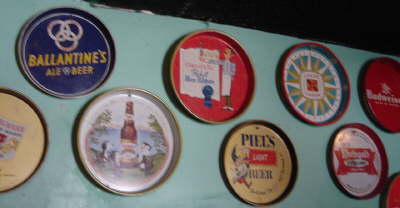 Beer trays hung on the wall in The Tower Bar

There were about five patrons arrayed along the bar when Erin and I got there around 10, just a half hour before the band went on. The place got packed pretty quickly though — by 10:45 there wasn’t much room to maneuver in. Roughly half of the space was given up to dancing.

Lady Dottie, a 60-something cook at the Mission Cafe, has a powerful, low voice pretty much perfect for singing R&B. The Diamonds, her backing band, consist of hipster musicians culled from several other local bands. Mondays at The Tower is only one of three regular gigs they have — on Wednesdays they play at Henry’s downtown, and they have a weekly appearance at the House of Blues as well. But I’d bet that, out of the three venues, The Tower is the place to catch them.

You should definitely check them out if you’re in town.