What prompted me to write up a description of the Web platform the other day? Well, there are several technologies that, while branded “Web,” don’t really have anything to do with the actual Web of documents we all use every day.

For instance, consider “Web” Services: SOAP and the rest of the (thankfully dying) WS-Deathstar stack live primarily behind the scenes, in intranets and beyond the corporate firewalls of the world. Instead of being built with the pieces of the Web platform, this is a whole alternate stack.

But I don’t want to talk about WS-*, I’d like to look at the relationship between the Web platform on the one hand, and RDF and the Semantic “Web” on the other hand. These technologies were designed for a future which never materialized, the Web as predicted by the W3C over a decade ago. That future—envisioned at a workshop in 1998—was of a Web made up of a family of XML languages which could be composed together in compound documents. 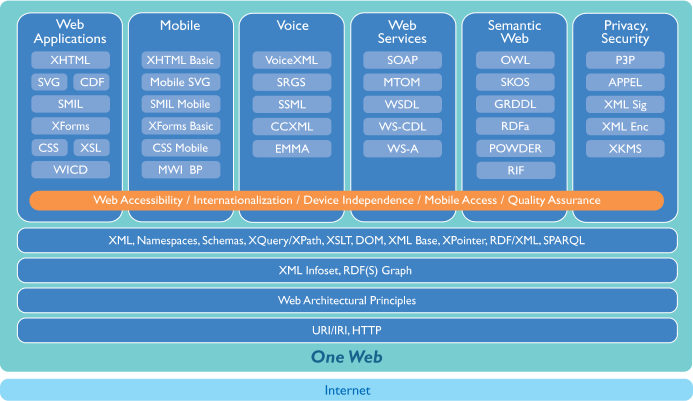 This isn’t what happened. HTML continued to be the basis for the Web, and the family of XML languages developed at the W3C saw a general lack of adoption by authors in the wild. Henri illustrates this W3C-Web disconnect really well in his comments on the Web technology stack (linkification mine):

It is interesting how little the [W3C technology stack] graphic has in common with a stack one might draw for a contemporary Web browser rendering a Web document (such as this one) or a Web application.

The main boxes one would expect to see are HTTP, HTML, DOM, JavaScript, CSS and, nowadays, XMLHttpRequest. Yet, HTML, JavaScript and XHR are missing from the W3C graphic. Moreover, the graphic has a lot of boxes that have nothing to do with browsing the Web.

So, for years, the W3C headed off in a direction separate from the direction the Web itself was heading. These things live on a shadow web, but not the Web as you and I know it.

Eventually, some folks realized that we needed to continue making progress within an HTML world—something which requires different design considerations than those of an XML world. From the WaSP’s interview with Ian Hickson (linkification and emphasis mine):

In 2004, the W3C had a workshop, the “The W3C Workshop on Web Applications and Compound Documents”, where we (the browser vendors) argued that it was imperative that HTML be extended in a backwards-compatible way[…] The outcome of that workshop was that the W3C concluded that HTML was still dead, as had been decided in a workshop in 1998, and that if we wanted to do something like HTML 5, we should go elsewhere. So we announced a mailing list, and did it there.

So we found ourselves in a world in which the real work on advancing the Web platform was happening anywhere but the World Wide Web Consortium. Much of the difficulty surrounding the HTML5 effort consists of attempting to course-correct the W3C while not simply discarding all of the work that was unfortunately developed under the assumption of an XML future. The SVG-in-HTML and MathML-in-HTML efforts are some of the more positive examples of this.